FrenchFamily French Line Key ancestry in East Anglia in England[ENG] (Cambridgeshire[CAM], Essex[ESX], Suffolk[SFK] & Norfolk[NFK]) and Meath[MEA], Longford[LOG], Wicklow[WIC] & Dublin[DUB] in Ireland[IRL], but also elsewhere in England. NB Question marks (?) indicate dodgy entries involving more than the usual amount of guesswork. Abbreviations - click here. Surname interests include French & Teeling and Kemp, Milward, Norman, Scott, Softly/Softley & Wagg. Genealogical Exchange: for further information, corrections and connections: Email Chris at FrenchFamily.info I may have further information not recorded on the web site. Thankyou to the many people who have helped, apologies to those I have not credited. Click on HOME to restore the frame and left index.

Richard Webb's article The Original Brexit in the New Scientist for 9-Mar-2019 sets the scene for the United Kingdom - illustrated by the Natural History Museum below. Click on it to enlarge the view. 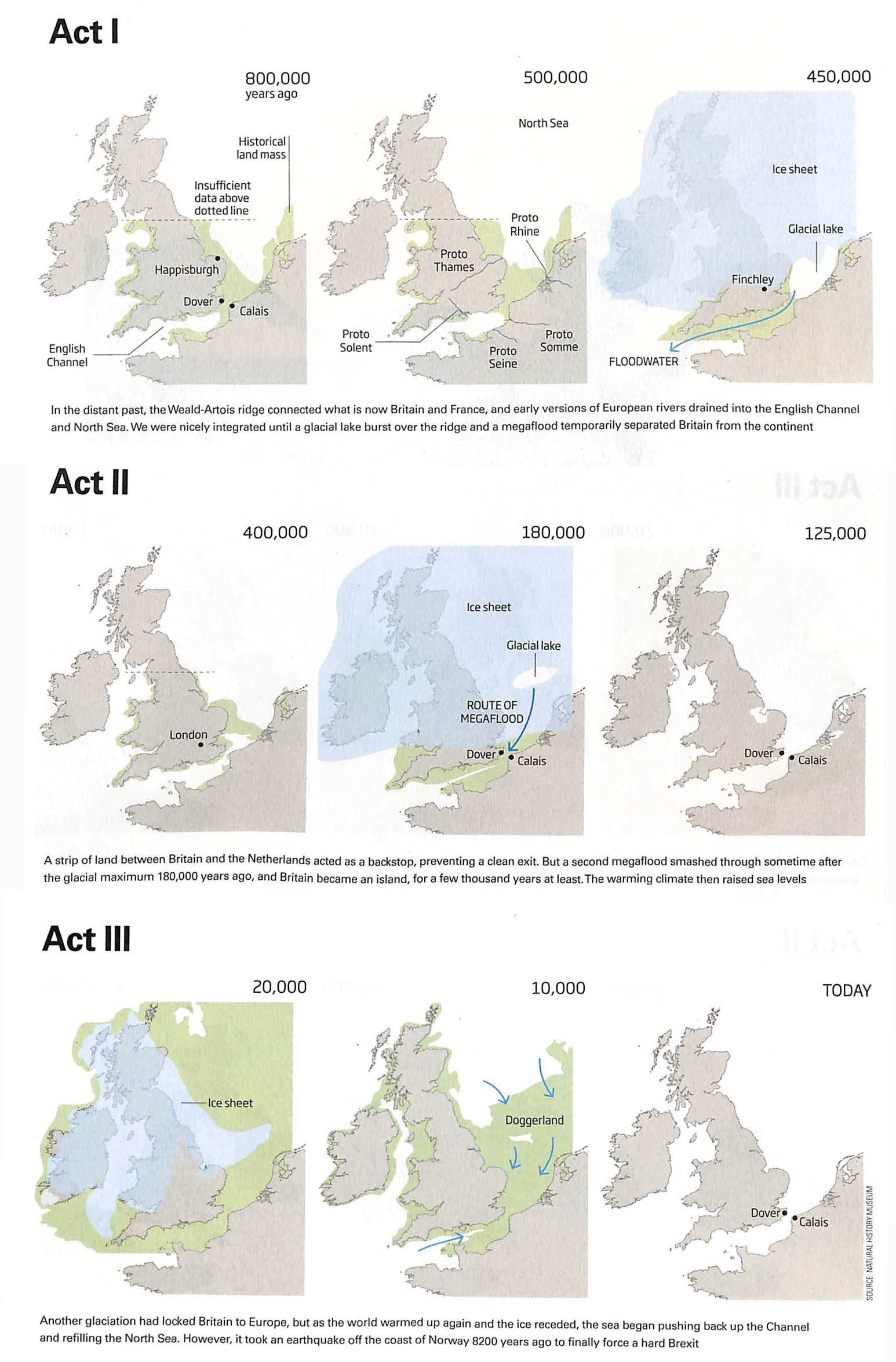 54 BCE AND FOLLOWING
Maybe my male ancestors arrived in Essex with the Roman Legionnaires at Colchester and Caister St Edmund, Essex in the early part of the first millenium CE. But the surname suggests a much later arrival.

400-500 CE Anglo-Saxon
It was reported in 2015 that following collapse of Roman rule in Britain in 410, the "Anglo-Saxons were the only conquering force, around 400-500 CE, to substantially alter the country’s genetic makeup, with most white British people now owing almost 30% of their DNA to the ancestors of modern-day Germans."

1066 CE And Following
The surname, FRENCH, suggests our male ancestor crossed the Channel from France in the early part of the second millenium when surnames were first introduced, maybe as part of Norman "immigration", eg David Weston. From "1066 and all that" to maybe as late as the 13th or 14th century. A quick Google found "Fixed surnames began in France around the year 1000, came into England with the Norman Conquest, and arrived in Scotland circa 1124" but also "The fashion of adding surnames began in Britain in the thirteenth century."

Geoffrey le Franceis (1205) and Richard Frensh (1425) are among those mentioned in connection with Frenches Farms at Little Bardfield and Felsted.

A sceptical view of surname origins has also been expressed, suggesting (eg Terry Smithers) that some serfs "took, or were given, the name of their lord or master, who may well have been descended from a Norman while the serf who adopted their name almost certainly was not".

Julie Jefferies, The UK population: past, present and future: "It is believed that the population [of England] grew quickly in the 12th and 13th centuries and reached between four and six million by the end of the 13th century. However, the 14th century was a period where disease and the struggle to produce an adequate food supply prevented further population growth ... in 1377... the total population is estimated to have been between 2.2 and 3.1 million ... By 1750 the English population is estimated to have been 5.74 million, probably similar to the level prior to the mortality crises of the 14th century." The following chart is from other stats posted on the internet but tells the same story

1100-1350 CE Historical View of Essex FRENCH's
In 1896 A D Weld French focussed on the surnames of Francus, Franceis & French in Medieval times. What he had to say should perhaps be taken with a pinch of salt, he appears to have been an enthusiastic genealogist living in the US. See my transcription of Essex French extracts from A D Weld's County Records of the Surnames of Francus, Franceis, French, in England CE 1100-1350 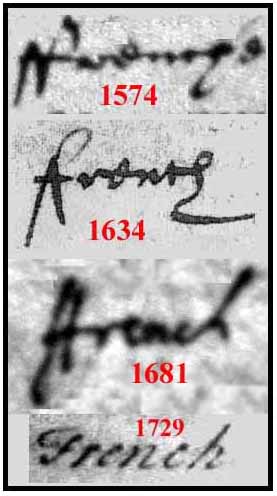 Historical Essex FRENCH's 14th & 17th Century
In 1768 the Reverend Morant published his work on Essex. See my transcription of Essex French extracts from Philip Morant's The History and Antiquities of the County of Essex

Also below is a blue cloropleth showing the distribution of immigrants with the FRENCH Surname in England between 1330 and 1550. All told over two thousand people living in England are listed as having migrated from France (including Normandy) with 'French' in one form or another in their surname during the period of the Hundred Years’ War and the Black Death, the Wars of the Roses and the Reformation. Fuller details can be found on the chart and clicking on it will reveal a Google map with details of all these immigrants. Our male-line ancestor may have come to England before of after this but maybe this period is most likely.

It has been reported that "People living in southern and central England today typically share about 40% of their DNA with the French, 11% with the Danes and 9% with the Belgians ... The French contribution was not linked to the Norman invasion of 1066, however, but a previously unknown wave of migration to Britain some time after then end of the last Ice Age nearly 10,000 years ago."

1500 CE And Following
There were also Huguenot Protestant migrations from France beginning in the 1500s, but heavier in the 1600s, and such immigrants might also have adopted the name French.

We are talking two types of family history here, social and biological. Unfortunately, the two will never completely agree due to misattributed paternity and nonpaternity events, including adoption, name change and illegitimacy (Is the probability of the problem of the order of 2 to 5% for each generation?), something which is virtually inevitable with any line in any family tree if you go back far enough! See: Misattributed Paternity.

1600 CE And Following
Our most distant known FRENCH ancestors appear to hail from Felsted, Essex in England in the early 17th Century (maybe even the mid 16th). Their movements over the last 200 years are shown below. Go to the foot of this web page for details of the ancestry.

Click on above map for higher resolution image, created with Progeny's Map My Family Tree - http://www.progenygenealogy.com/ and then edited with Adobe Photoshop. 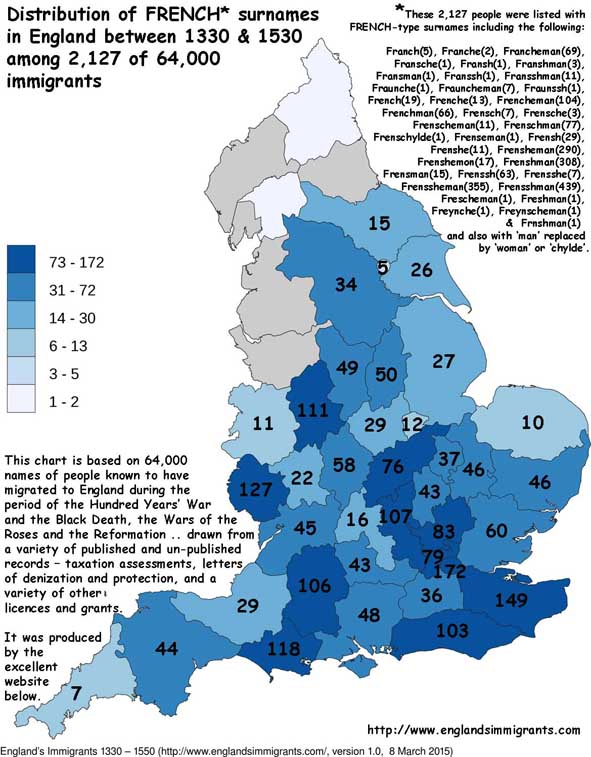 Distribution of Immigrants with FRENCH Surname in England in 1330-1550

Click on above map for Google map with clickable markers and full details of all 2,107 men, women & children. 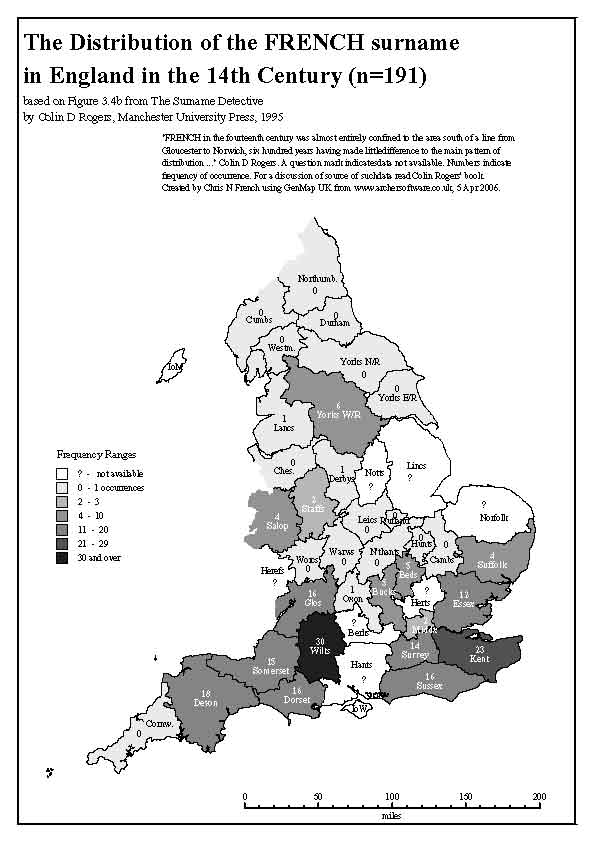 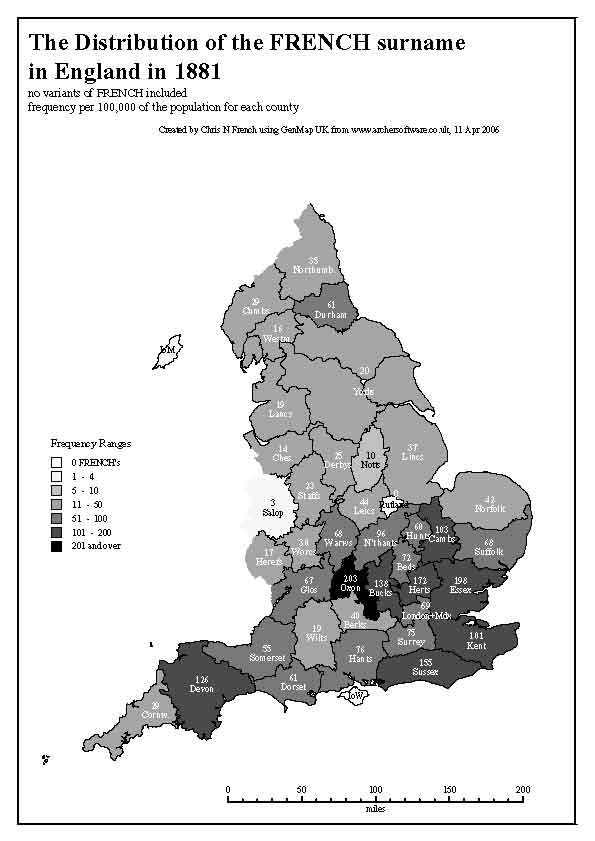 FRENCH Surname Distribution in England in 1881

Corrections and additions are welcomed. Please email me Email Chris at FrenchFamily.info The tree has been privatized with places and dates of living people omitted. The names of living can also be changed to "Unknown" on request.

Please note that this tree cannot be 100 per cent accurate. From time to time a little bit of guesswork (or maybe over-enthusiasm) has been used and there will inevitable be errors within it. It isn't practical to include sources and reasons for the guesses here. Please use your own critical judgement. Corrections are welcome. I am currently in touch with other Essex FRENCH researchers who have provided findings and helped me to assemble this information.

Indexes of the images of the early Felsted & Finchingfield parish registers available online at the Essex Record Office can be found here. Click on:

If this page has been reached directly, then clicking on HOME above will also restore the frame and left index. Then a click on "Family Genealogy" will enable the top links to our other genealogy pages with our roots and other family lines - two female (mtDNA), TEELING, NORMAN, SCOTT, MILWARD, SOFTLEY, WAGG and KEMP.