This page was extracted in 2014 from one of SHARP's leaflets, but their website can be found here SHARP (Sedgeford Historical & Archeaological Research Project) and is well worth a visit.

The Sedgeford Historical and Archaeological Research Project (SHARP) was established in 1996 as a long-term, multi-period, multi-disciplinary research project. Its primary objective being to investigate the entire range of human settlement and land use in the Norfolk parish of Sedgeford.

Prior to SHARP commencing its research in 1996, Sedgeford had seen only limited archaeological investigation taking place. The first was undertaken in 1954 by the Norfolk Research Committee which identified the existence of a Middle to Late Anglo-Saxon cemetery in Boneyard Field. A further and more detailed evaluation was carried out by Dr Peter Jewell of Cambridge University in 1957 and 1958, during which 70 skeletons were recovered.

SHARP’S first season saw it place its main excavation area adjacent to the 1950s trenches of Dr. Peter Jewell and for the next eleven years the excavation of the Middle to Late Anglo-Saxon cemetery in Boneyard Field was to become the main focus of the project. In 2007 the focus shifted further up the slope of the river valley into Chalkpit Field, which still remains the project’s main research area.

However, SHARP’S research has not just been focussed on the Anglo-Saxons in Sedgeford. In keeping with the project’s original objective of exploring human settlement throughout the parish, we have now built up 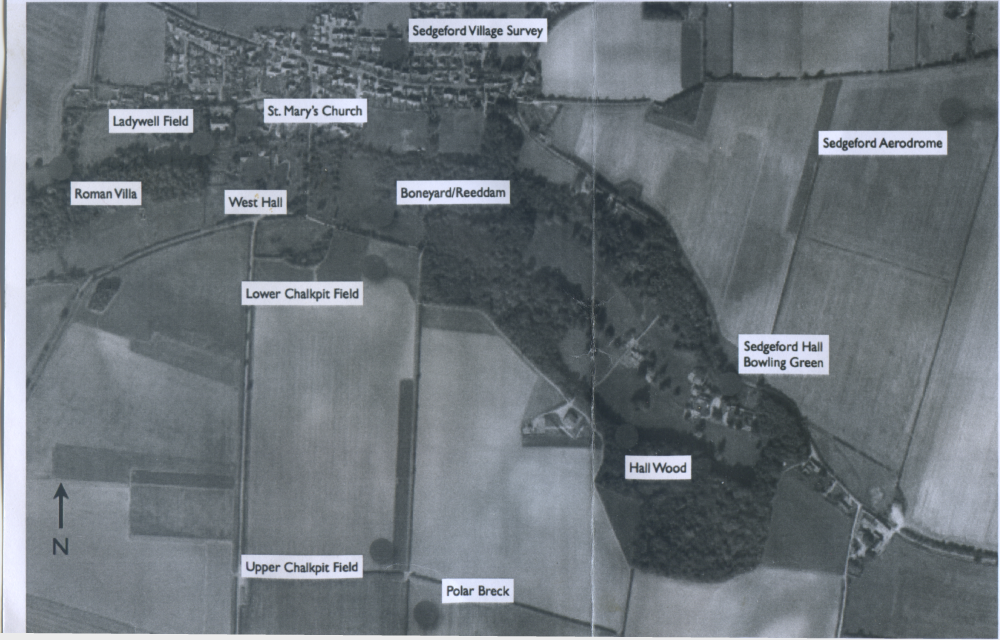 an exciting history of people living and working in Sedgeford that stretches back almost five thousand years. Here is a summary of SHARP’S Sedgeford Timeline:

Worked flint found in the Boneyard/Reeddam area indicates that small groups of mobile hunter-gatherers were moving through the landscape during this period. Some of the worked flint indicates that some temporary camps may have been set up.

Our worked flint from this period indicates early farmers at work in the area. A notable find being a flint axe that was lost or discarded.

During the Bronze Age a series of round barrows are constructed in the area, some of them forming a tight cluster on rising ground. In 2009, during the excavation of the Middle to Late Anglo-Saxon settlement in Lower Chalkpit Field, a crouched burial was discovered which has been dated to the Early Bronze Age (2458 - 2200 BC).

crouched burial, this burial was dated to the Middle Iron Age (between 373 and 203 BC).

During the Iron Age, a sanctuary exists, along with farmstead, on Upper Chalkpit, in Polar Breck and Shernborne Breck, where a gold tore (found in two parts in 1965 and 2004), a gold stater, and a bronze chariot fitting were found among the deposits.

Reeddam, where a hoard of 39 gold staters (Gallo-Belgic E staters, 60 - 50 BC) were found concealed within a cow’s humerus. A horse burial was also discovered on the same site.

Both cremation and inhumation cemeteries are established along the line of the river valley.

A new village and cemetery are established on the Boneyard-Reeddam/Lower Chalkpit Field site. In addition to the 70 burials excavated by Jewell in the 1950s, SHARP has excavated a further 300 burials. The village, situated in Lower Chalkpit Field, is reorganised on a regular rectilinear grid pattern. A monumental D-shaped enclosure is constructed on the southern side of the village.

In 2013 research began on the first of four strong magnetic anomalies, identified on the 2007 geophysical survey. Archaeological excavation uncovered a large baked clay oven which contained quantities of burnt grain, suggesting cereal processing and making the site a significant one.

The Boneyard-Reeddam/Lower Chalkpit village and cemetery are abandoned. A new settlement focus is established at West Hall. ‘Red Rose’ is interred in a chapel at West Hall.

Coastal defence aerodrome, which later develops into a training function, established at Whin Close, about a mile to the east of Sedgeford.